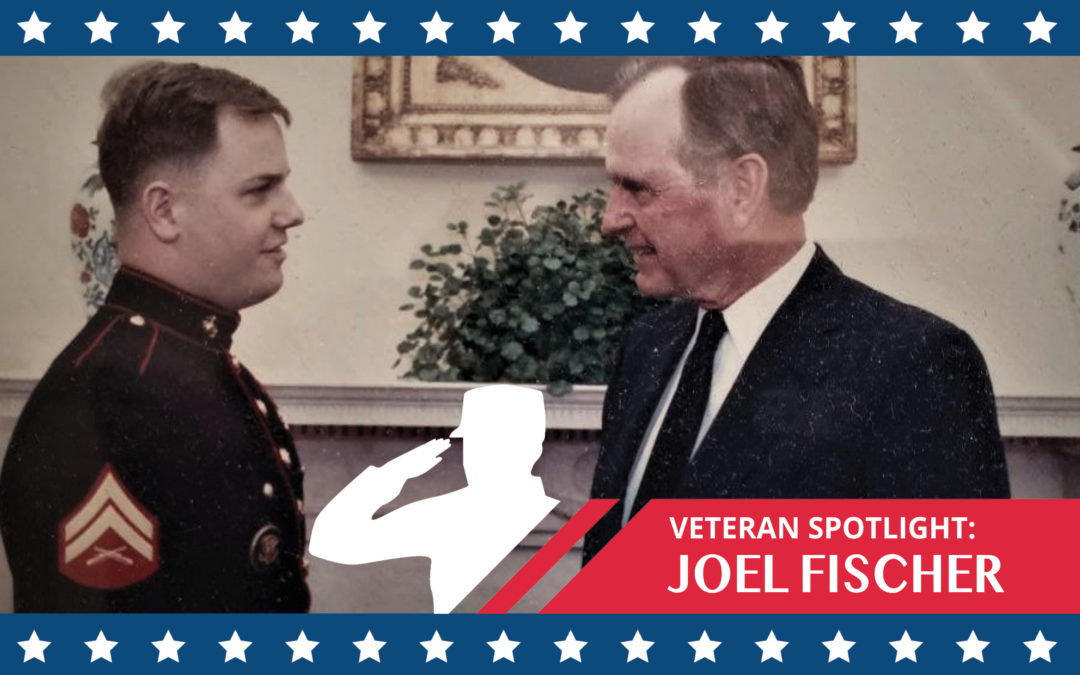 In May 1987, 18-year-old Joel Fischer joined the United States Marine Corps to serve as a Marine Corps Security Forces Guard. While in his infantry course, he was handpicked to go through a battery of psychological and physical tests. Once the course and the additional testing were done, he was stationed at 8th and I Barracks in Washington D.C. He stayed at 8th and I until he attained his “Yankee White” special top-secret security clearance.

In September 1988, they awarded his clearance, and, at the ripe old age of 19, young Joel Fischer found himself stationed at the Marine Security Company—Camp David. A place nicknamed Shangri-La by President Roosevelt after his first visit there on April 22, 1942, he named it after the fictional place described in the 1933 novel Lost Horizon by British author James Hilton. Hilton described Shangri-La “as a mystical, harmonious valley, gently guided from a lamasery, enclosed in the western end of the Kunlun Mountains.”

Camp David was founded by President Franklin D. Roosevelt as Shangri-La but was later renamed Camp David after Dwight Eisenhower’s grandson, David Eisenhower. Officially, the facility is known as The Naval Support Facility Thurmont and is the rustic 125-acre mountain retreat of the President of the United States. Camp David is part of the Catoctin Mountain Park recreational area in Frederick County, Maryland, 60 miles north of Washington, D.C. Today the facility continues to serve as the Presidential Retreat as a private, secluded place for recreation, contemplation, rest, and relaxation. Many historical events have occurred at the Presidential Retreat, including the planning of the Normandy invasion, Eisenhower-Khrushchev meetings, discussions of the Bay of Pigs Invasion, Vietnam War discussions, and many other meetings with foreign dignitaries and guests. Maintaining the privacy and secluded atmosphere of the retreat is an important role for Catoctin Mountain Park and the Presidential Retreat is not open to the public.

During his tenure with the Marines, Joel advanced to the rank of Corporal and was a squad leader. Joel had a couple of very memorable events take place while he was serving at Camp David. He met President Reagan there and was also acting Sergeant of the guard prior to the summit between President Bush and President Gorbachev, escorting the Soviet advance team with the U.S. Secret Service around the Camp. He also had the privilege of meeting President George H. W. Bush in the White House Oval Office just before he left the service.

It wasn’t very long after Joel returned home that he attended his brother’s wedding. Little did he know that on that particular night, the bartender he met—Reggie (who happened to be the daughter of the banquet hall owners)—would end up becoming his wife. When Joel left the service, most police forces were looking for people with college degrees, so he went back to the company he worked for prior to the service. But, with some help from his wife’s friends, he was able to change employers.

He got his class B driver’s license and, for the next 25 years, worked as a home appliance delivery and installer technician. In the spring of 2019, he decided to make a career change and went out to get his class A driver’s license. Then, in August 2019, he joined the Dot Transportation, Inc. (DTI) family as a full-time customer delivery specialist (CDS).

“The service teaches you to think independently but also that it’s important to know your part of something bigger,” explained Joel. “Dot, just like the military, always sends that same message. Like the brotherhood one finds in the service, there’s a brotherhood amongst truck drivers as well.”

In his off-time Joel enjoys playing poker, golfing, reading, movies, biking, and jogging a bit, too. He has been married to Reggie for 26 years. Yes, that is the same young lady he met 28 years ago at his brother’s wedding—only now she runs the banquet hall. Together they have two children, their 25-year-old son Jacob and their 24 year-old-daughter Jordyn. Joel lives in Worth, Illinois, and works at the University Park distribution center (DC).

From Dot and Dot Transportation: Thank you, Joel, and all of our great veterans, for your service to our country!