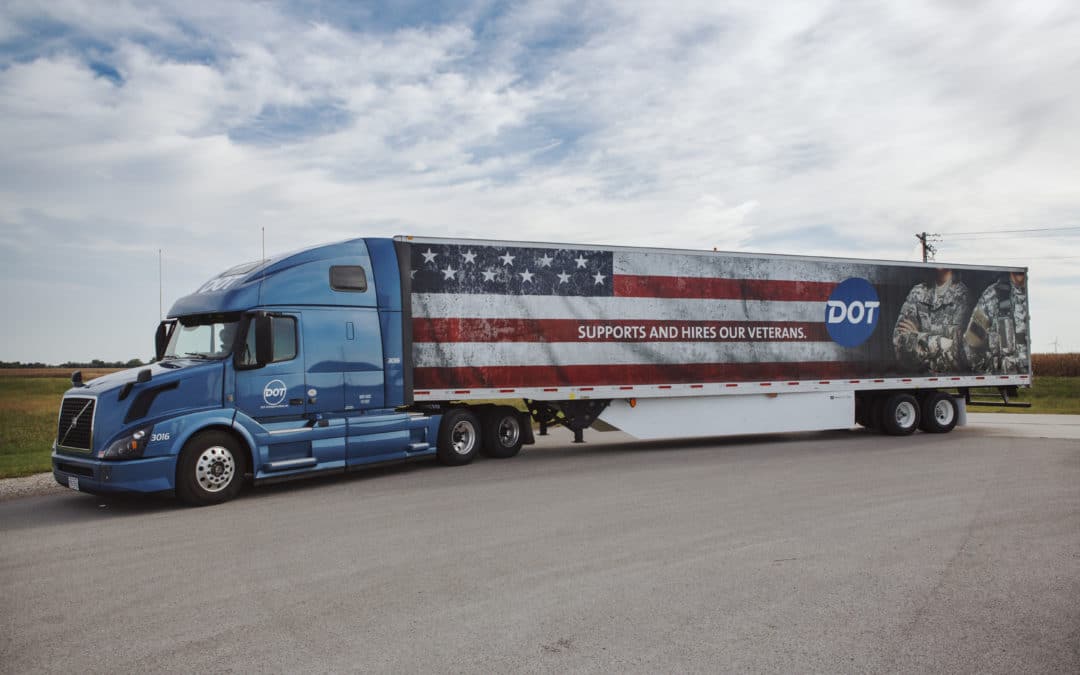 At Dot Transportation, our commitment to veterans spans the whole year — not simply on Veterans

Day. But when this holiday approached this year, we wanted to honor veterans in a big way.

Yvette Seal, a senior graphic designer at Dot, had a big task at hand.

“I’ve designed two military trailers [in the past,]” she says. “It’s overwhelming the amount of attention that they get. The current trailer is booked a year in advance because the drivers themselves are booked.”

When it was time to design a new trailer, Seal tried to include every branch of the service on the image and have them flow seamlessly together.

As she came up with three designs, Seal and the Dot team decided it was too hard to choose between the options.

“We decided that maybe it wasn’t up to us, and that we should extend it to the public and let them decide for us,” she says.

Who better to decide on the truck design than Dot veteran employees themselves?

“I was pretty excited to sit down with the wife to go over the different trailers and see what she thought of them and see if she came up with the same idea of which one we liked best,” says Adam McKinney, Army from 1999-2011.

When the veterans trailer poll was posted online, more than 1,000 people voted on their favorite design.

“Dot represents inclusion, and veterans are strong-willed and determined and very focused,” Seal says. “And I think that’s a perfect pool of people to choose from.”

You voted — we listened. Dot’s veteran employee resource group and others gathered to celebrate the reveal.

A Commitment to Hiring Veterans

“Knowing that RT Tracy was a former Marine brought a lot of determination, a lot of drive into the company and to bring this to Dot, is just full circle for me,” Seal says.

“In the military, you’ve got your leaders and the good leaders care for their subordinates, and here at Dot I feel like I’m part of the family,” says Warren Freeman, Army from 1992-2018.

McKinney acknowledges a similar sentiment about working at Dot.

“Dot’s been great to me and my family,” he says. “I get home when I need to be, they’re really flexible with me, and it just shows you how much they care about their people and veterans included.”

“I think it’s good for the veterans to see it going down the road,” Penton says. “I’d recommend Dot to anyone. If hindsight was worth anything, I think I’d have been here 20 years ago.”

Seal is proud to honor veterans through these truck designs and hope they become a beacon to all who see them driving across the country.

“I hope [the trailer] strikes the sense of being proud and that they’re being recognized and that people haven’t forgotten the service that they’ve provided for us.”

Are you a veteran looking for a change?

Fill out the form below and someone from the DTI team will be in contact with you soon.