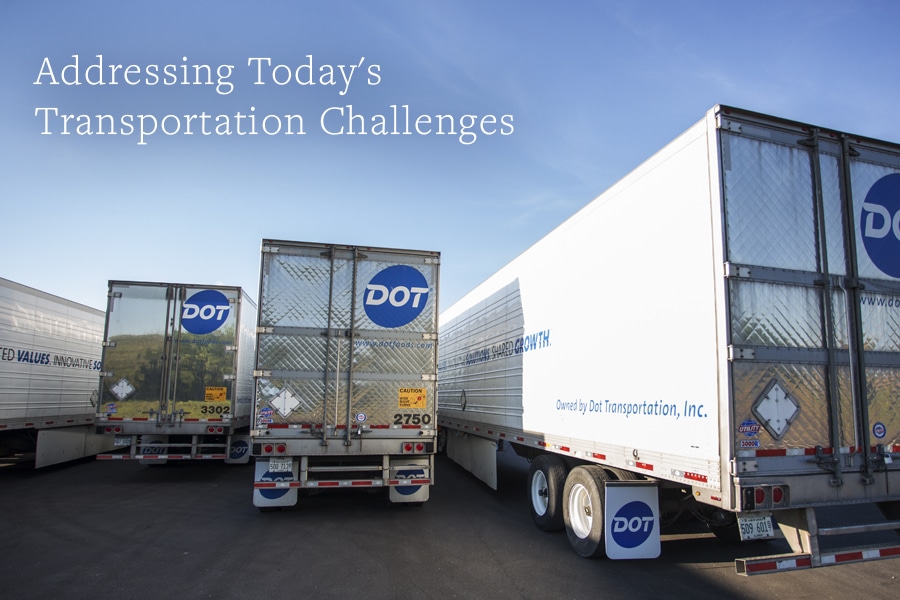 “Do you have enough drivers at your company?”

All but a few said they needed more—a lot more.

Unfortunately, this isn’t unique, unusual, or going away anytime soon. We don’t need to tell you that no amount of automation or minor policy changes will reduce the number of necessary drivers across the United States. The marketplace has too much need.

The Insights into Trucking Challenges

of the nation’s freight moves by truck

million drivers transport those tons across the country

According to Allen, the trucking industry is short 50,000 drivers—and that number is expected to increase to 174,000 by 2026. Due to drivers retiring and a 27 percent turnover rate, IFDA estimates the industry will need to hire 900,000 new drivers in the next decade.

“That’s a lot of new people to bring into this industry,” Allen said.

The reasons behind the driver shortage aren’t new:

The Inspiration for a Brighter Transportation Industry

Dot Transportation, Inc. (DTI) President Paul Mugerditchian also spoke during the seminar. He shared how the company hires and retains its drivers.

“The one thing we do that might be different is that we are ready to hire people right out of CDL school,” Mugerditchian said.

“We think we are going to end up with a better employee, better driver, and put more smiles on our customers’ faces by training them ourselves. It’s a bigger expense, but it creates a better customer experience.”

For any new driver they hire, DTI guarantees their first-year income, which averages $62,000 annually companywide.

“For someone right out of school, that is a big deal, because they know if they work hard, they have an income guarantee,” Mugerditchian said.

Mugerditchian then gave tips, based on his experience, on retaining drivers. DTI does everything in its power to make sure that, when requested, they get their drivers home for important events. Whatever it is, build it into their schedule and stick to it, he said.

He also said DTI recruits from the Dot Foods warehouse, pays for those employees to go to truck driving school, and keeps them employed in the warehouse so they can provide a steady income for themselves and their family while getting their CDL.

Whether it is XM radio or seat program, any amenity you can add, add it. It’s a big deal to drivers, he said.

For example, DTI’s late-model Volvo® conventionals have stand-up sleepers, power inverters, cab and bunk heaters, automatic transmission, cruise and engine breaks, and more. Plus, they are maintained by our in-house mechanics—all things that drivers appreciate and want to know.

Mugerditchian touches on the importance of recognizing your drivers’ accomplishments.

“Whether it is a handshake, a picnic, whatever it is, provide recognition. It’s the right thing to do,” Mugerditchian said.

Another point that Mugerditchian drove home was the importance of really listening when your drivers come to chat with you. Whether it is just to say “hi” or to discuss something serious, making then feel heard and then following through with your drivers is one of the best ways to retain them.

“When your driver is visiting with you, it can’t be background noise,” he said. “If you don’t take away those pearls of wisdom that they just shared with you, it’s a big negative. You need to listen and follow up.”

Ready to work for a company who values you? Fill out the form below.