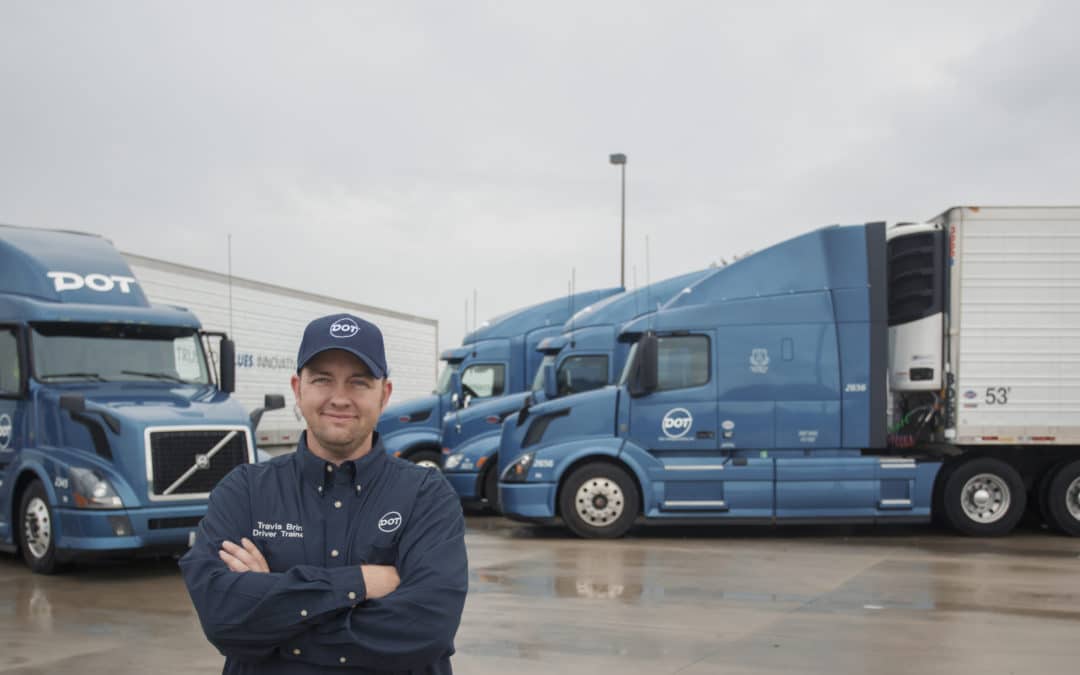 Meet two Dot employees who made career changes and hit the road.

Truck Driving to Support His Family

Travis Brim found himself in a position that no person would want to be in. In 2015, the home improvement company he worked for was restructuring. Worried about his job and providing for his family, he started looking for other opportunities.

Brim saw a billboard advertising Dot Foods’ driving careers. He was hesitant about transitioning to a new career and unsure about being able to provide for his family. But once his wife urged him to apply, Brim took a chance.

By the end of February 2015, he was hired for Dot Transportation, Inc. Indiana’s Earn to Learn driver training program.

Through the program, student drivers earn a weekly salary while they attend professional driving school. The program was made possible by state and local grants that DTI applied for in 2014. With those grant dollars, participants can train for their Class A CDL license and HAZMAT endorsements at several driver training programs throughout the region. Upon graduation, drivers must complete further training at DTI before becoming a full-time driver.

Since Earn to Learn launched in October 2014, DTI has hired more than 42 people through the program. To qualify, drivers must apply online and live within 50–75 miles of Dot Foods Indiana, which includes Indianapolis, Connersville, Richmond, Portland, Muncie, Anderson, Brookville, Hartford City, Winchester, Rushville, and Liberty.

For someone like Brim, it was the best possible way to transition into a new career.

“The Earn to Learn program was instrumental in helping me make such a major career change,” Brim says. “I wouldn’t have been able to go without a paycheck during the weeks that I was in school.”

Brim was promoted to driver trainer in April 2017, and his happiness has earned him a nickname.

“They call me Smiley because I smile all of the time,” Brim said. “I guess I’m just always happy.”

From the Warehouse to the Road “When I applied for my first position at Dot, I thought I was simply filling out an application. Instead, I got a career out of it,” Winters says.

Winters started his career at Dot as a picker in the Mt. Sterling warehouse. During the first seven years of his career, he was promoted to cooler coordinator and then to dock coordinator/backup supervisor. In these roles, Winters met DTI drivers and learned about life on the road.

Noticing Winters’ interest in driving, they encouraged him to go to truck driving school. Winters attended Lincoln Land Community College in Springfield, Illinois. During the four-week training period, Winters utilized the interest-free income subsidy program and worked weekends in the warehouse through the Warehouse to Driver Program.

Through the program, the trainee must work at least 10 hours in their current role each week and Dot pays them for an additional 30 hours per week. The trainee continues to receive their full-time benefits while enrolled in the program. When the person starts driving full time, he or she must pay back the subsidized loan to Dot, which is via their quarterly bonus.

Winters started driving for DTI in April 2006 and enjoyed being a solo driver for six years.

“I was pretty much my own boss,” he says. “I had my appointments, and as long I arrived at them in a safe and timely manner, I was on my own. I had the freedom to make my own daily schedule within the scope of the load assignment, and I let dispatch choose where I went.”

“I felt like I needed another change,” he says. “The driver trainer coordinator job developed, and I thought it would be a good fit for myself. Other drivers also urged me to apply.”

Both Brim and Winters were open to taking a chance and found amazing new opportunities in places they never expected.

“My last job doesn’t compare to how Dot treats employees,” Brim says. “I couldn’t ask for anything better.”

Looking to make your own career u-turn? Check out more information about how to become a Dot driver or apply today.