When my life needed balance, financial stability, flexibility, direction, a change, something new,

I took the wheel.

So what does YOUR life need?

A change of scenery?

Choose a schedule that fits with your lifestyle

Your office is the open road

Whether you log your first mile at age 18 or 65, Dot Transportation, Inc. is here to help you set the wheels in motion on your next professional challenge.

You CAN do this!

When Alejandro Alvarez immigrated to the United States from Mexico in search of a better life for his family, he had no idea where to begin. With no money, no leads, and a family in Mexico counting on him to lay the groundwork, Alejandro turned to trucking. Eight years and nearly one million miles later, Alejandro is touring the country as a proud DTI team driver and sharing the captain’s seat with the best co-pilot he could’ve asked for: his son, David.

Life on the Road

People are often surprised at just how much money they can make as a truck driver. In 2021, DTI drivers earned an average of $96,000 fleet-wide.

Trucking is the perfect way to provide for and support your family. At DTI we offer full family health benefits as well as paid holidays and guaranteed PTO.

Being a driver doesn’t mean leaving your family for weeks or months at a time. DTI drivers are guaranteed weekly home time.

No cubicles, no micromanagement, and no bosses breathing down your neck. Many who come from office jobs find truck driving a refreshing change of pace.

There’s nothing routine about truck driving. It’s your chance to tour the country, meet interesting people, and take in new experiences every single day.

There’s nothing quite like driving a truck for a living. It’s an exclusive club unlike any other.

A former driver of another trucking company, Derek’s first introduction to Dot Transportation came via a trucking-focused Reddit thread. Though the favorable reviews seemed too good to be true, Derek applied for an open driver position in Modesto, California. And when that first DTI paycheck arrived, he couldn’t believe his eyes. At just 22 years old, the fresh-faced rookie driver was making FOUR TIMES what he did at his previous driving job. Between the outstanding pay, the flexible scheduling, and the welcoming environment, Derek knew he had made the right choice.

So what does it TAKE
to be a driver?

Just the willingness and desire to try something new.

First, you’ll need to earn your commercial driver’s license through an accredited driving school. Choose DTI and we’ll not only pay for your school, we’ll pay YOU while you study!

Once licensed, you’ll join an experienced trainer for a hands-on, eight-week training program to learn the tricks of the trade. Our goal is to make sure every driver is ready to hit the road safely.

Time to hit the road!

What it MEANS to
Be a Driver 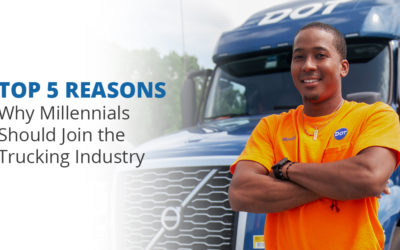 Top 5 Reasons Why Millennials Should Join the Trucking Industry

Millennials have become the talk of the town where workforces are concerned. In 2016, Millennials...

END_OF_DOCUMENT_TOKEN_TO_BE_REPLACED

At Dot Transportation, Inc. (DTI), we know you’re way more than just your job. Most of the stuff...

END_OF_DOCUMENT_TOKEN_TO_BE_REPLACED

Everything You Need to Know About the DTI “Traditional” Schedule

As a professional truck driver, it is often assumed that your whole life is spent on the road....

END_OF_DOCUMENT_TOKEN_TO_BE_REPLACED

I’m five feet tall, so the biggest obstacle was the sheer size of the truck and trailer. But now that I’m used to it, I’m probably more comfortable in the truck than in my own car.

Nowadays trucking is a different industry. It provides so much and they teach you everything. They won’t let you go until they know you’re safe.

Driving changed my life and gave me a lot of opportunities.

I was so worried about being different. But truck driving showed me that I’m capable of a lot more than I thought I was.

Truck driving is way less stressful. You’ll enjoy it. You don’t have to worry about mandatory overtime. You just get to be by yourself, listen to music, and enjoy the day.

If you’re seeking your next professional challenge, DTI may be just what you’re looking for. Find a school near you to take the next step.