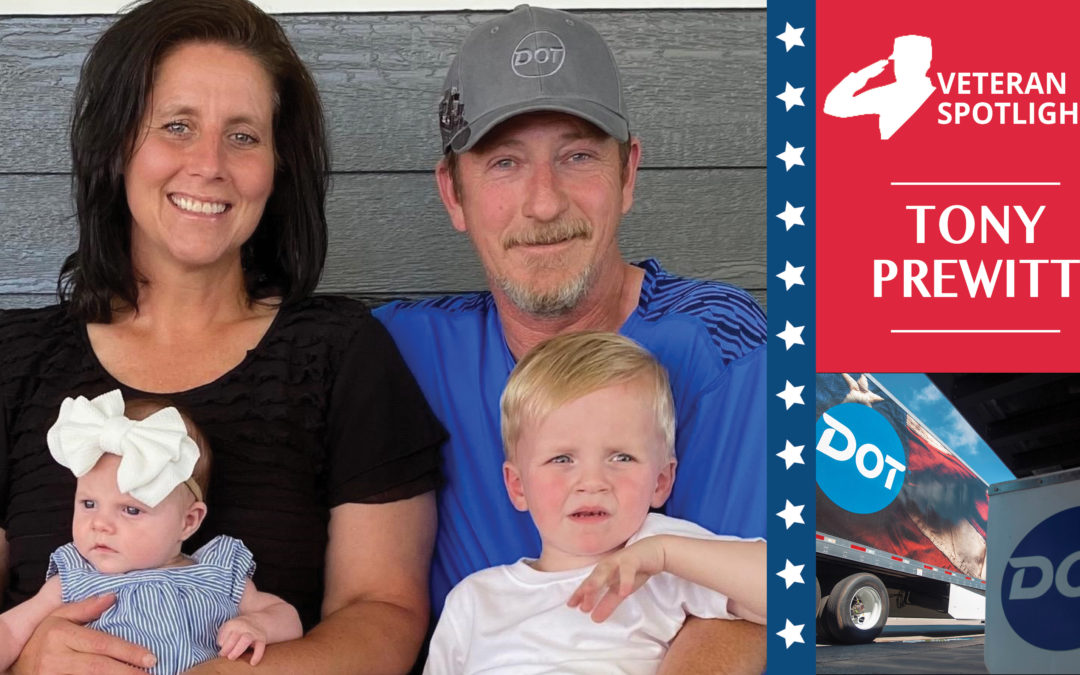 In August 1984, during his junior year of high school, Tony Prewitt joined the United States Army as a 62B construction equipment repairer. He joined the Army because the only choices he had in his hometown of Delco, Idaho, were working in one of the three potato processing plants. With some help from his stepfather, Tony convinced his mother to sign paperwork allowing him to enter at the age of 17. After his senior year, Tony left for Fort Leonard Wood, Missouri, where he spent 10 weeks in Basic Combat Training and another 20 weeks in Advanced Individual Training learning the specifics of his new job. Upon graduation, Tony returned home as a hometown recruiter for two weeks and reconnected with his family and friends before he transferred to his first assignment in his new career.

In December 1985, Tony reported to the 92nd Engineering Battalion in Fort Stewart, Georgia—whose primary mission was to support the Army Rangers out of Ft. Hunter Army Airfield in Savannah, Georgia. After almost two years at Fort Stewart, he found himself stationed overseas in Karlsruhe, Germany, (just 20 minutes from France) as part of the 79th Engineer Battalion. While stationed in Germany during fall 1989, Tony decided to leave active duty, but stay in the reserves. Tony returned to Twin Falls, Idaho, as a reservist in the 321st Engineering Battalion where he learned to blow up bridges versus being a mechanic on the construction equipment that was used to build them.

After marrying his wife, Jody, in June 1991, they decided he should return to active duty—only this time Tony decided to become a 91D otherwise known as an operating room specialist. His wife was a civilian medical assistant, and he thought it would be nice for him to have this in common with her. In November of 1991, after a short stint at Fort Sam Houston in San Antonio, Texas, where he learned the new required skills, he was assigned to Madigan Army Medical Center at Fort Lewis, Washington. Tony was part of an Open-Heart Surgery team for five years, and to top it all off, he also became the father of a son and a daughter.

In April 1996, Tony and Jody decided they should again separate from active duty and move back home to be closer to family. Back home, Tony found employment with the local hospital and Jody started her own drug testing business. But it wasn’t very long before Tony was drawn back to military service—this time in the U.S. Army Active Guard/Reserve with the 872nd Maintenance Company in Ogden, Utah, as a 63B light-wheeled vehicle mechanic. Tony served with the 877th in Ogden just over two years before he was transferred to the Regional Training SiteMaintenance Company back at Fort McCoy, Wisconsin. At the Regional Training Site, Tony was an instructor at the basic and advanced non-commissioned officer’s courses, where he first mastered the use of almost every land-based vehicle the Army had and then taught the training courses on them. During his five years at Fort McCoy, Tony was promoted to master sergeant (MSG).

In the summer of 2006, Tony was transferred to the 191st Combat Sustainment Support Battalion in Salt Lake City, Utah, as the battalion motor sergeant.  In that position, Master Sergeant Prewitt operationally oversaw approximately $3 billion of equipment and had between 500 and 600 mechanics who were positioned underneath him spread across 12 separate units. It wasn’t long before MSG Prewitt found himself filling in the sergeant major (SGM).

In March of 2007 during the 191st deployment spin up, Tony suffered a massive heart attack. Once released from the hospital, Tony was put on 45 days of home duty, and his unit deployed without him in May to Afghanistan. But acting SGM Prewitt couldn’t leave his men while they were deployed, so for the next two years, he served them from in-garrison back in Salt Lake City. Upon their safe return in October of 2009, Tony decided to retire after a total of 29 years of active, guard, and reserve time. Tony reminisced that his most memorable time in the military was when his two preteen children were the ones to pin his new stripes on him at his Master Sergeant Promotion Ceremony.

Tony and Jody returned home and went back to managing their drug testing business for the next few years. Then in January of 2015, Tony was hired on with Dot at the Burley distribution center (DC). Then, in February, Jody came on board. They started teaming as soon as Jody completed her training.

“Had I known about Dot Foods when I retired, I would have started with them right away,” said Tony.

He loves the Dot culture.

“It really is a family atmosphere from the Tracy family on down—very much the military, just one big family.”

Tony and Jody’s dedicated week have them going between Burley and Mt. Sterling, which Tony describes as the best of both worlds because their son’s family lives close to them in Idaho and their daughter’s family lives in Quincy, Illinois. Their son-in-law also works for Dot in Mt Sterling’s IT department. He and Jody have two grandchildren and one on the way.

“They are our whole world,” said Tony.

People often ask Tony how he and his wife can team, and he says simply, “She is my best friend.”

Tony and Jody have been married 24 years this past June.

From Dot Foods and DTI – Thank you to all our great veterans for your service to our country!