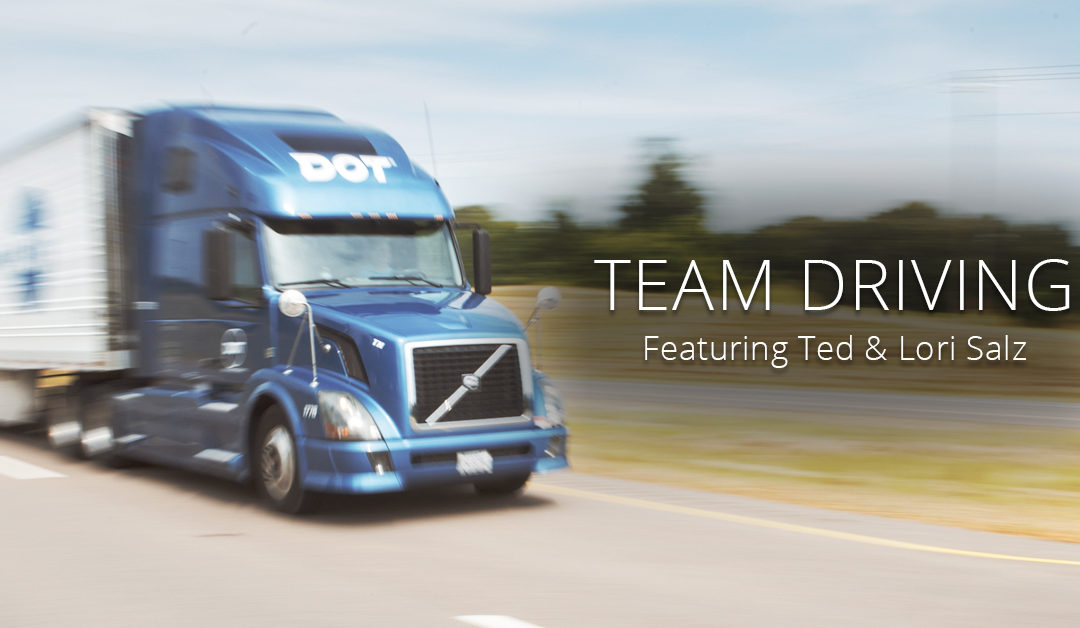 Ted and Lori Salz are a team of drivers based out of the Dot Transportation, Inc. (DTI) terminal in Charles City, Iowa. Trucking has been in the couple’s lives since Ted was 16 years old.

“I love to drive. I always have. Since I started at 16—I just really loved it,” said Ted.

But they haven’t always spent the majority of their week on the road.

Before entering a career in trucking full time, the couple owned a plumbing shop that specialized in heating, plumbing, and refrigeration. But, about 10 years ago, Ted decided to hit the road. Then in the winter of 2019, with their children all grown up and independent, Lori decided to join him as team drivers.

“Better together than apart… We’re one of those couples that if we’re together 24 hours a day, we’re good with that,” said Lori.

Ted was unhappy in his old job and was looking for a change. When he expressed this to another driver who had just joined Dot, that driver told him that Dot was a dependable and reputable company. That sounded great to Ted, so he reached out to our transportation team.

“After talking to Dave, I knew I had to drive for Dot… so I kept bugging him until it happened,” said Ted.

Ted joined the Dot family three years ago. While Lori applied to team drive with Ted in October 2017, those plans were put on hold when doctors discovered that Lori had breast cancer.

Lori was on Dot’s health care plan when she was diagnosed with breast cancer. The support the Dot team gave the Salz family during their tough time is part of what got them through.

It was clear that Dot was more than just the couple’s employer while Lori battled cancer.

“Dot really stood behind us,” said Ted. “It’s really unbelievable what they did for us.” The Salz family tends to spend any extra time they have either with family or camping—or camping with the family.

“Almost every weekend of the summer we are enjoying the outdoors,” said Ted. “Every weekend we get together [with family]. We also like to watch movies when we have the time.”

The best part about driving for Dot?

“The camaraderie,” said Ted. “Each DC has their own thing going on. They always ask, ‘How’re you doing?’ It’s basically like going and visiting family.”

Thankfully, Lori made a full recovery and was able to officially join the Dot team in January of 2019. After going through driving school and DTI’s training and orientation program, Lori hit the road with Ted—sharing responsibility behind the wheel the way they would at home.

During an average week, the Salz team packs up and hits the road on a Sunday morning. Ted and Lori expect to be home sometime on Friday.

Team Salz has been to various places across the country, traveling to and from multiple distribution centers (DC) and customers.

A Passion for Truck Driving

Lori said seeing the country and the scenery on the road has been one of her favorite parts about driving—along with learning new things. When discussing their recent trip to Georgia, Lori explained her fascination with the different peak crop harvest times.

“The seasons are so different between what we are used to up here [in Iowa] and what they have down there.”

For Ted, there  are two things he loves about driving.

“One—I’m with my wife. And two—I like going to the different DCs,” he said.“The people are the best. They will all sit there and laugh with you and try to make people happy. The scenery on the road is also the best—especially in the fall.”

Both Lori and Ted emphasized the importance of understanding the different lifestyle professional drivers face.

“If you don’t mind being away from home, it’s what you should do,” said Ted. “It pays well and gives you the chance to visit places you wouldn’t otherwise go.”

Lori also talked about the transition from being a woman at home to becoming a woman truck driver and spending the majority of her time on the road.

“Being a woman driver, if you are considering it, be sure you weigh all the options,” she said. “I was used to being at home, but now I’m not at home. You have to consider a lot of things, but it was definitely worth it for us.”

Driving for Dot in Their Own Words

“Dot has several things to offer and will do almost anything to accommodate you. As long as you can handle the lifestyle, it pays well, and they’re a great company to work for.”

Do you want to be a team driver at Dot?

Not sure team driving is for you?